Project ResQu was a 2 year, $7M project co-funded through the Queensland State Government Smart Futures Fund, Boeing Research and Technology Australia, Insitu Pacific Ltd., CSIRO and QUT. Unmanned Aircraft (UA) can fly for extended periods of time and in conditions considered too dangerous for piloted aircraft, making them ideally suited to operations such as the continuous mapping of floodwaters and fire-fronts, assessing damage to infrastructure and locating disaster survivors. UA would have greatly assisted Queensland’s 2011 disaster response had it been possible to obtain approval to fly. This project undertook the safety studies and development of the automated safety technologies necessary to enable the timely approval of UA for disaster recovery, as well as routinely delivering benefits through surveys for biosecurity and resource management. ResQu comprised a challenging mix of project streams ranging from early stage research through to industry demonstrators and technology transfers. A key aim of the project was to bridge the gaps between research, industry implementation, and public uptake. 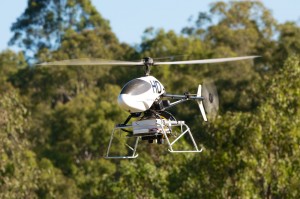 The Biosecurity Application stream was focused on the development of an unmanned aircraft system for performing Miconia weed surveys. The team was focusing on the autonomous systems that enable safe low-altitude flight in difficult terrain, a sensing system that captures data suitable for manual off-line detection of weeds such as Miconia, and tools for generating survey flight plans and off-line analysis. These were demonstrated in a series of highly successful flight trials at El Arish, near Cairns in North Queensland. The results outperformed those of manned aircraft detection demonstrating greater detection performance and eliminating risk to on-board crew members in low altitude manned flights. (Video)

This research team worked upon addressing the most critical barrier to the realisation of routine Unmanned Aircraft (UA) operations – the need for appropriate regulations to provide assurances in the safety of UA operations. The systematic study of the safety risks and social issues relating to the acceptance of these risks is foundational to the development of effective regulations for UAS.

In consultation with the UAS industry stakeholders and CASA, the team developed a risk-based regulatory framework to enable the timely and consistent management of safe UAS operations in a broad range of civil applications. This included the research and development of detailed risk models and the exploration of social factors impacting the development of effective civil regulations and risk communication strategies. Particular sub-elements of this stream focused upon:

The team worked upon the migration of the Detect And Avoid (DAA) system developed in SmartSkies from a Cessna scale platform to a commercially utilised small UAS platform. This technology is key to the safe utilisation of UAS in mixed airspace, and this represents a key step in achieving a viable product. The migration of this system posed a significant challenge in reducing the size, weight and power requirements of a complex system. A world first was achieved in this sense when the vision based DAA capable unmanned aircraft successfully demonstrated collision threat detections in a series of encounters with a Cessna 172 target aircraft. (Video)

The “AELS” team were focused on the development of another key technology to enable the routine operation of fixed-wing UAS over populated areas. A current known limitation of UAS is the ability to perform an unassisted emergency landing in the event of a failure such as a communication breakdown or engine failure.

Key barriers to the effective utilisation of UAS for civilian applications include the public acceptance of the technology, and an adequate skilled labour base to support it as it grows. In order to meet these barriers ahead of demand, Project ResQu also actively engaged in the domains of public education and promotion. Key facets of this included support of the UAV  Challenge, attendance at relevant career and industry days, and the hosting of various industry and school visitors to the QUT ARCAA facility. In addition, ARCAA identified an opportunity for public engagement through the support of the QUT/ARS Electronica UAS demonstration at the QUT Robotronica day in August 2013. This day was attended by approximately 20,000 members of the public, and culminated in (at the time) the largest demonstration of a UAS swarm in the southern hemisphere. This consisted of a choreographed artistic demonstration of 30 quadcopters flying simultaneously, at night, over an inner CBD location, and was visible for many kilometres around the Brisbane city. This event was reported internationally, and would not have been possible without the collaborative regulatory efforts provided by ARCAA and CASA. (Video)

For further information regarding this project please contact the project contacts below: